"I just picked up my race kit. This thing isn't even timed. Lame!"

So week 6 of the HBBC wasn't all that great for me. I had planned on getting out to run 5 times this week but reality turned it into 3 and I never got to the gym once. I'm really missing the summer right now when getting a run in is so much easier. Tonight was also the Brita Resolution Run. I realized when I picked up my kit on Thursday that this was a fun run and not even timed. Being a super competitive girl, this didn't sit well with me (as you can see from my text to Sarah above). The same Sarah who has been trying to weasel her way out of this run for weeks. Today we sent a few texts back and forth about what time we would meet downtown which finally resulted in Sarah breaking me down into meeting up at a pub for a drink rather than doing the run. We got our coats out of the run, and we both did 5k's on our own today (mine part of dailyvitaminF's virtual 5k) so what the heck. I got my run in and time with my friend so I'm not disappointed that we didn't make it to the organised run. Now had it have been a chip race things would have been different.......... 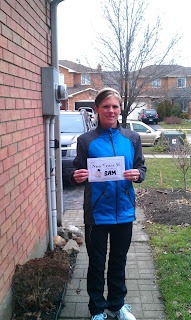 NYE Virtual 5k Race Bib. And my Resolution Run Swag, Boy was that coat hot to run in!

This run was a mess for me. I had planned on running at 5pm downtown so I ate at 3pm. Then Sarah and her texts happened and I went out at about 3:45 instead. Poached eggs and toast along with Acai Pomegranate juice do not make a good meal right before running. I honestly thought I was going to vomit a few times during this run (which really worried me because a lot of people were out walking their dogs on the trail this afternoon. You know dogs and vomit..........nasty!) and suffered quite a bit of acid reflux. Adding in the fact that I was hotter than hell in this jacket this run sucked and I was happy to see it over. Crappy run to end the year with. Hopefully tomorrow morning's run goes better! BYE BYE 2011.﻿ 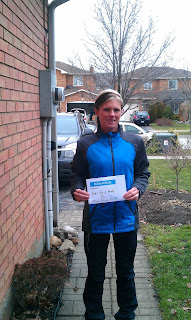 HBBC Resolution Run Race Bib. This is tomorrow's run but I plan on doing it at 6am before I go to work so I figured I'd get my son to take this picture at the same time as the other one.

I got up at 6am for this run, I put in a sweaty 5K (wore my Resolution Run jacket again) and then walked the dog around the block to cool down. Thankfully the acid reflux from yesterday was gone! It certainly made things more comfortable. Then off to work I went. Boo. I'm glad that I welcomed 2012 with a run! Thanks Amanda for getting my butt out of bed and into my new running shoes!