After doing Barrelman last year and seeing that I could actually cover the 70.3 distance and live to tell the tale I wanted to tackle an Ironman™ branded race because, Ironman™!! I was unable to register for Mont Tremblant 70.3 in time with Mari (which in hindsight was probably for the best, the weather was awful) I decided to sign up for Muskoka. I knew it was hard but how hard could it be? *insert pompus laughter here*

My family came up to Huntsville for the weekend with me and apart from being trapped inside the hotel for most of Saturday because of the rain we had a really great time. It's always fun to get away. We arrived Friday afternoon and after checking into the hotel we went to registration (where they still had me in the first wave with the 30-34 year olds!) and got my kit and hit the Ironman store. I'm cheap and only bought a water bottle. I knew I would be getting a finishers shirt & hat and had just gotten a backpack so what was the point in buying more? We quickly met up with Emma and her family to say hello and then made our way to downtown Hunstville. We ate dinner on the lakeside patio at Boston Pizza (beautiful!) and then drove around checking out the sights (and locals) and even found the town crack house.


Saturday I met up with Irina and Zin and went to the athlete briefing. It was still pouring rain so I left my bike at the hotel room and figured I'd bring it back later in the afternoon. After the meeting I texted Derek to come and get me and he suggested that it had stopped raining so why don't they bring my bike over. Ok, good plan I thought and went up to the road to meet them. Once they arrived I found my bike IN the trunk rather than on the bike rack that Emma had lent me for the weekend and was a little worried. I quickly rode it around the parking lot and things seemed ok so I took it to transition, covered it in a garbage bag and said goodbye to go do a little geocaching.

Race morning finally came and I was tired. I didn't sleep well Friday night and the power went out Saturday night and the noise of the microwave losing power in our room had woken me out of a deep sleep. Then of course when the power came back on that woke me up too. Add in Derek's snoring and it's a recipe for a restless night. I met Irina and Zin in the lobby at 5:25 and we made our way to the shuttle bus where Irina secured my timing chip with a safety pin. To be honest I wasn't 100% sure why she did this. I did figure it out later though. I was feeling pretty nervous now, I was really scared about the bike course. You can do it everyone assured me, but could I? I got myself set up in transition, hit the porta potty and made my way down to the swim start with Mellen who I found in the transition area. Once again she gave me assurance that I could do this bike. I wondered did she know that I'm not a strong cyclist and only really had 8 weeks training under my belt after my marathon training?

Oh well, too late for second thoughts now. I saw instagrammer @piperb123 in the swim wave corral (I had just introduced myself to her in transition) and we chatted until it was time to get into the water. It was nice to have something to take my mind off of things. The water was nice and warm but it took me a little more time than usual to get my breathing controlled. I was so scared so I wasn't surprised. I lined myself up at the back of the pack just so that I wouldn't need to worry about people swimming over me for a while. I knew the relay wave was 5 minutes behind mine and that the fast ones would catch me by the halfway point but for now I could just swim and be happy. So the horn sounded the start and that's what I did. The swim was beautiful. I caught some people in the wave ahead of mine pretty early, I hoped that they made the swim cut off time. My sighting wasn't too bad. At first we were swimming into the sun so I just followed the crowd and hoped for the best because I couldn't see a single buoy for a while. After the turnaround the fast relay swimmers had caught up but they didn't bother me too much. I was in a sea of baby blue caps, green caps, dark blue caps and a couple of pink caps (two waves ahead of mine!!) just all trying to make it out of the water. I had a hard time after the final turn figuring out where the swim exit was so my line was not straight. Mental note to self, look and see where the swim exit is next time before the start. With about 200m left to go I felt someone grab my foot so I started kicking. Then I felt them grab at my timing chip and the velcro go lose! WTF?! I thought to myself. This idiot is trying to rip off my timing chip. Thank God Irina had put that safety pin on there! As buddy went to swim past me I grabbed his leg and squeezed just to let him know I was not impressed. Who the hell did this dick weed think he was trying to ruin my race like that?! I can ruin my race all on my own, thank you very much!! I made it to the exit where a man helped me out of the water and then a girl helped me off with my wetsuit and I started my way up the long hill back to transition. I think that maybe you were supposed to run this but nah. I got back to transition, fixed my timing chip and got my bike and left. 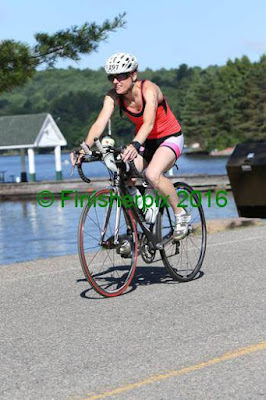