Ah, Around the Bay. How I love you. 30k of Hamilton filth, hills and the sound of people dying. What's not to love?!

On Friday as is now tradition I met up with Emma (and her hubby) Zindine and Ivanka and had Burrito Boyz for lunch and then headed over to the expo. I was pretty disappointed to see that there were no souvenir shirts for sale this year and the race shirts were now Running Room and not New Balance. And once again they were purple! I have 4 ATB race shirts. Two pink, two purple. Please get a new colour palette next year Around the Bay!! Once we finished there I headed to physio to get another laser treatment on my ankle, which was now swollen again, and some graston on my calves. Then it was home to ice my ankle for the rest of the weekend. 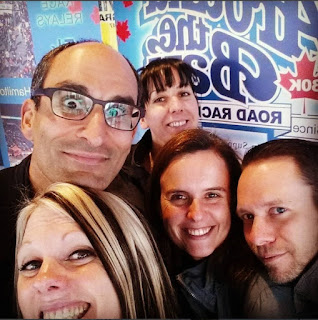 Race day rolled around and Nicole drove us into Hamilton. We headed to Copps to meet up with friends, eat bananas and hit the bathroom lines a couple of times before the race started. 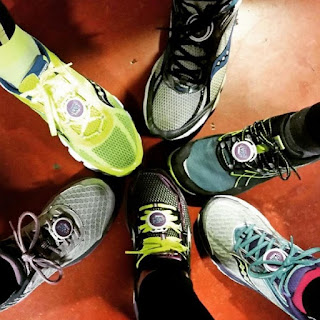 Eventually we headed down to the start corrals only to realize that the horn had blown and we were still on the sidewalk. EEK! Quickly I ripped off my snazzy Resolution Run throwaway jacket and we made our way into the sea of runners and were off. As luck would have it I noticed my friend Michelle amongst the spectators and was able to run over and give her a hello hug before I crossed the start line. I was super happy to see her! It was pretty cold out, my ankle was feeling iffy and my legs felt like lead. exactly how you want to start a race.

Jamie and Graham were with us at this point and Jamie made some remark about short girls not dodging runners and losing them. I mentioned that probably wasn't good for my ankle any way so we didn't do too much bobbing and weaving. It was super crowded for a long time and I was really nervous about someone taking me out and hurting my ankle even more. I still have a marathon to run in 4 weeks. This is not a goal race for me! Our race plan was simply 'see how things go and dial it back if my ankle or Nicole's IT band starts to make it's presence known'. Time ticked away and the sun came out to teach us all a lesson about overdressing for the race, as always. The sweat was pouring off me but I didn't want to take anything off for fear of eventually turning the corner into headwind. Around 6k we passed Jamie's hat that his nana had knit him on the road. I felt bad because I wouldn't throw anything away that my Nana had made me. Turns out it fell out of his pocket so I'm sorry that I didn't pick it up. We took the over passes in stride, never slowing down and ran over the 10k mats in 53:41.

I like to break this race up into 4 parts. Gross Hamilton. The beachstrip. Northshore and York. We were now on the beachstrip and the spectators are pretty great here. There's the old people in fur coats in front of the castle, my friend Bill and his family (Bill has told me that it's cool to watch the elite runners go by and then a little while later you hear the age groupers approaching), Laura's husband Bernie and his granddad, the smell of cooking with a hint of weed and the lift bridge. We got about 2/3 of the way over the lift bridge and I told Nicole that I had to walk. It did not make my ankle feel good AT ALL! Thankfully she didn't complain. Of course there was a photographer on the lift bridge and I was all ready for him except he was too busy taking pictures of the friggin' seagulls in the steel beams! Dude, those seagulls aren't going to buy your pictures. Mind you neither am I because they are so overpriced so carry on! We played back and forth with Emma on the beachstrip but never saw her again after we turned onto Northshore. This is where Nicole's IT band started acting up so we backed off. No sense ruining Goodlife for a training run race.

We saw Amy out on Northshore who was nice enough to offer us Advil. That actually cracked me up. Thankfully she didn't also offer peanuts a la Barb. LOL Northshore is alive with spectators and it really helps with the rolling hills. There's so much going on down there with people blasting music and cheering that the rollers don't seem so bad. Then you get to the hill leading up to LaSalle and want to die but you truck up it ready for more spectators. My sister hadn't said that she was going to be there this year but I looked for her anyway. Turns out they were at the Globetrotters in Toronto. Oh well, the hope of seeing another friendly face was enough for me at that point. "One more crappy hill and then that lame incline and we're done with the hills" I said to Nicole. I was now in cheerleader mode because I could tell that Nicole's knee was really bothering her. I had felt like something was touching my butt around the LaSalle hill and then realized that it was my muscle spasming. After we turned onto Plains Rd I said to Nicole. "Four more miles. We can do this! I just want to get this shit over with! My ankle is starting to hurt and my butt is killing me." I never even mentioned the crazy chafing that I could feel going on with my bra. The salt from my sweat was stinging it like crazy. We ran past the We Will Rock you Guy and got a laugh when he told me that I was "a good looker". "Obviously he hasn't seen me up close with mouth goo and crusty salt stains" I said to Nicole. 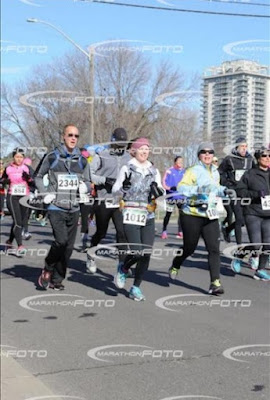 As Plains turned into York the headwind that I knew would be waiting for us started. Because who doesn't want to end a pretty tough race with headwind?! We ran along York and I tried talking a bit to Nicole to get her mind off of things but my tummy was starting to hurt a little. . I took out a frozen Gin-Gin around 27k and hoped for the best. Of course there was a photographer right there too but thankfully there is no photographic evidence of me trying to chew that thing. We high fived the guy with beet red bare feet, ran past the reepers and had a close encounter with the 51 feet under kind. I asked Nicole if we were going to hold hands at the finish line and sing "Best friends". I think that I found this more funny than she did. We ran past all of the dying runners and I tried to give encouragement to those I could. "Holy crap, where the frig is the finish?!?!" I bitched aloud. "Twice around the track" Nicole said to me. I think one of us says this at every race.

We turned the corner to run into Copps and both spoke a warning to the other one to take it easy. I must have taken it a little easier than Nicole on the turn because I had to sprint to catch up to her, and then she looked at me and ran even harder and yelled for me to grab her hand. I finished the race with a huge smile on my face but forgot to sing "best friends". Jokes on me.