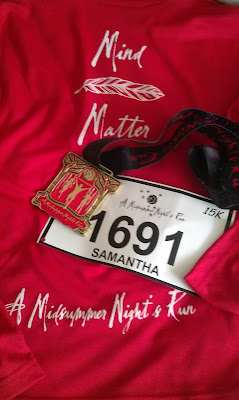 Rewind 1 year ago to this race..... My worst race experience ever! Obviously I had to go back for redemption, but half assed redemption because I may be crazy but I'm not stupid. I opted for the 15K distance this time around. Fool me once shame on you, fool me twice yada yada yada.
Same as last year I had no idea what to do with the day leading up to the 5:45pm race time. I took the dog for a long walk, cleaned the bathroom, did some laundry and watched tv. I didn't have a nap this time around because I had to leave so early to catch the ferry in time. Fast forward to 4pm and I was really regretting not squeezing one in. Zzzzzzzz. I wasn't really all that hungry during the day either so I didn't eat a whole lot, something else to have regrets about. Midsummer. The race of regrets.

I stopped for Gatorade at the 6K water station because I was really starting to feel depleted of energy and saw Henry. I chugged back the Gatorade, waved at Henry and declined the water that he was offering me. I quickly wondered if I looked as brutally hot as I felt but looking around I noticed everyone else covered in sweat, although probably not as red faced as me, and put it out of my mind. Shortly after this I saw Emma, Pierre and Laura. I gave them all a wave and started to feel my energy returning. Yeah! I got this! Yay Gatorade! I'm still hot though. My face feels like it's going to spontaneously combust! I really wish I could take off my hat! Why did I decide to wear this thing anyway?! I'm starting to notice a lot of random people wandering on the walkway now, and those weird bike things that people are riding? I'm really loving dodging those. I hit a pot hole and rolled my ankle a little but was able to recover quickly, thank goodness. I soon passed the 9k sign only to look at my Garmin to find it reading 8.5k. Amazing. I am now going to run the longest km ever. Lucky me!
Next 5K paces
5:32 drinking the Gatorade Koolaid
5:23
5:26
5:20
5:21

Around the 10K mark the lovely boardwalk came into play as did a stomach cramp. As I ran along here I reveled in the breeze coming off the lake all while trying to keep my footing on the rickety boards that were not very securely attached. I passed a lady who obviously  had tripped and fallen, getting medical attention. The boardwalk seemed to go on forever and as I passed the 30K markers I realized that those poor people had to run out here more than once! Suuuuucccckkkks! After about 2kms we were finally finished with this part of the route. Yeah! I played leap frog with a guy in a blue shirt for a little while and thought to myself that my splits have got to be all over the place right now. Boy I was right on the money with that one. We eventually came upon a grassy area to run on......of course we did, we've run on everything but tile flooring tonight!, and were directed to run through two trees in the middle of a field. I laughed to myself and wondered who the hell made up this course. Just as we came up to a bridge a lady caught up to my shoulder and said 'Good job girl. You've got this. I've been pacing off you for a while now'. Oh. Really? Well pace this! And off I went. I sped up with each footstep until I rounded the corner and had the finish line in my sights. My legs moved so fast, I was full on sprinting and everyone on the sidelines cheered me on. I saw Patty out of the corner of my eye, waved (or apparently thumbs upped her as the picture she sent me says) and then picked off everyone in front of me until I crossed that finish line. B goal accomplished! Yay!
﻿

Final paces
5:40  no idea what happened here other than my stomach cramp.
5:17
5:31
5:22
5:13
3:17
Consistency. Thy name is Sam.
Will I come back and test the Third Time's a Charm theory? Maybe. I have a crazy habit of forgetting how much something sucks until I'm back in that situation again. I have two kids don't I?
﻿ 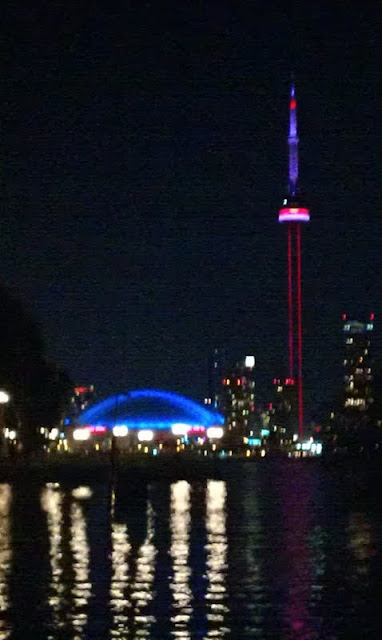 The city looks so nice. Where the hell is the ferry?! 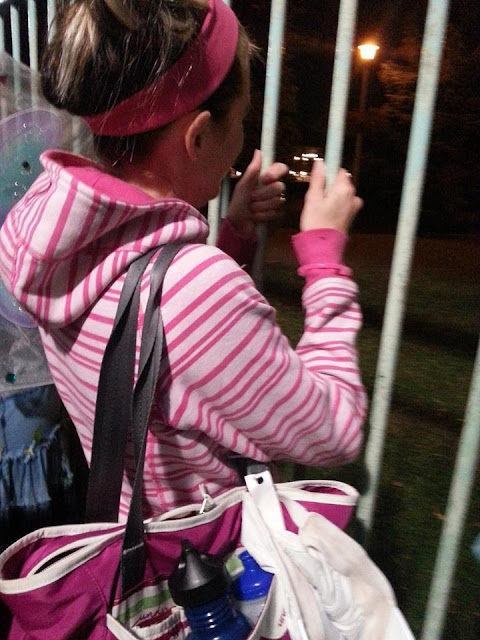 I WANNA GO HOME!!! It took about as long to run the race
as it did to wait in line for the ferry.

Looking on the Scotia website just now tells me that there are 67 days left for me to train to achieve my 1:45 half time goal. Some days I think yep, no problem. Others, not so much. Right now I'm feeling a little meh about it, maybe I can, maybe I can't. Hopefully Saturday's Midsummer 15K will give me a little peek into whether I can do it or not. Nicole tells me that my pace should be around 4:58/km (remember I never know this stuff) which should give me a finishing time of 1:14:30 so we'll see what happens. I do know that I have been hitting all of my paces during my training runs so that helps me feel a little more confident. Soon I will see an end to the shorter intervals and saying hello to crappy long tempo runs. I haven't quite decided how I feel about that yet. Nailing the 1000m intervals has been making me feel strong. It remains to be seen how running a 10K tempo will make me feel..... One thing that I do know for sure is that I need to get new shoes. Stat! I've gone to my go to running shoe store a couple of times but they haven't gotten the new NB stock in yet and what they do have does not come in 7.5D. Damn my Flintstone feet! My feet were quite sore during Saturdays 24K run and talking with Patty about it made me realize that I haven't gotten new shoes since just before Chilly. In March! I probably have close to 1000kms on these shoes! EEK! No wonder my feet were hurting. And my calves, hamstrings and knees. Please Factory Shoe, get some size 7.5D in immediately! I also need new shoes for work because I log a lot of miles there too so my lower body is getting a double whammy of suck from my inability to find shoes in my correct width. Update: I bought a pair of shoes today. Not my usual 1080s because they don't have the V3s in yet so I went with these 870s and will switch them over to work shoes once they get the 1080s in. Hopefully they're ok. I hate trying new shoes, why fix what isn't broken.....
﻿


Since their podcast first came out, the Jay & Dan Podcast has been my go to for solo runs where I want to listen to something other than the voices in my head. I love these guys and was so upset when I learned that they were leaving TSN and moving to Fox Sports in California. Their departure left me clamouring for something new to listen to so I posted on Daily Mile & Twitter asking for some suggestions and was given some good ones. Coincidentally I also saw a tweet from I can't remember who with a link to a post on podcasts based on what you like which I found quite good. Funny enough, some of the suggestions that were made to me were also on this list. So far I've tried out:

Ben Greenfield Fitness which was pretty informative but I do tend to tune out of what I am listening to so I missed a lot of stuff. The one episode that I downloaded spoke about introducing meat back into a vegetarian diet which I found interesting because I have thought about it over the years from time to time. From the sounds of it it's a total pain in the ass having to take hydrochloric acid for a few months to help your body break down the meat in your belly. Seems to me I'll stick to my lacto-ovo pescatarian diet for the time being.

NPR Pop Culture Happy Hour. I liked this one, and because it was just entertainment fluff it didn't really matter if I tuned out or not.

This American Life. I've listened to about 3 minutes of the podcast that I downloaded. Not because I wasn't enjoying it, but because it would come on when the others ended as I was coming up my street so I've only heard one of the stories on the episode. Hopefully I can finish it on tomorrow's 10K.

Also on cue I have Tim & Sid & Runner Academy. I also want to try out The Toblowsky Files and WTF with Marc Maron. Hopefully you can find something that you like on that link as well!