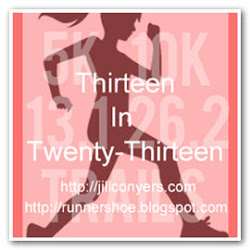 At the end of 2012 I decided to make my 2013 running goal 'Run 13 races'. What a pain in the ass that turned out to be! At times I felt like I was scrounging for races but looking back on it now, I'm happy for every single one that I ran. Here's a quick look back, mostly in pictures because as they say, a picture says 1000 words.


Chilly Half Marathon 1:51:45
Starting the year out with a PB bang! I had recently recovered from a calf strain but that didn't stop me from kicking butt in all of my pink glory!
Around the Bay 30K 2:48:56 PB
Major lesson learned at this race: NACHOS AND BEER ARE NOT APPROPRIATE THE NIGHT BEFORE A RACE. Between a bad cold and a bad belly from too much cheese and peppers on the nachos the night before I'm actually surprised that the Grimm Reaper didn't come for me during this race. At least we beat the train though!

Mercedes Oakville 10K 54:08
I ran this on my 42nd birthday with my son Kyle. I let him pick the race and he chose this one simply for the medal. Takes after his mama. I had a great time running with him for the first 9K but then he out kicked me with his non running legs once again. Kyle had never run this distance before nor did he train. He did learn a valuable lesson about chafing mind you.

Mississauga Marathon 4:10:24 PB
This race will always be close to my heart because it was my very first marathon. Having Patty yell at me for whining around 33K still haunts me to this day. Nothing could have prepared me for the mental game of the marathon. That truly sucked. But not as much as trying to get off of the shuttle bus after the race.


Sulphur Springs 25K Trail Race 3:22:49
Funnest day ever!! I had a smile on my face from start to finish of this run even through the suck ass hills!!


Moon in June 5K 23:31 PB
Puking behind the porta potties is classy right? Second place AG award. A crappy backpack filled with stuff that I already had.

Georgina 10 miler 1:28:11 PB
Ran this on tired legs with Patty on her birthday. It took me about as long to get home as it did to run this ghetto race.
Canada Day 5K 23:49
Another second place AG award. This time a dinner for two that expired before we could use it. Oh well, the medal was nice.

Midsummer Night's Run 15K 1:19:39
I am my own worst enemy. I am not a night runner. Yet another race that took me longer to get home from than it did to run. I'll more than likely go back next year though just because I like their swag and I don't learn my lessons well.

Oakville Half Marathon 1:47:17
A new PB for a race run with Richard. I never had a doubt in my mind during this run that I wouldn't make my sub 1:50 time goal. Lesson learned, running friends rock!
﻿


Run For the Toad - 50K relay
For some reason I never did a recap of this. Another super fun trail race! I ran this alongside Mari as the lead runners of our teams and then left it up to my team mates to make sure that we beat Mari's team at the finish. #teamplayer


Scotiabank Toronto Waterfront Half Marathon 1:46:16 PB
Was paced to this new PB by the super fantastic Kenny! I ran out of steam at the very end but still proud of my effort.


Road 2 Hope Half Marathon 1:48:27
I knew this day wasn't going to end the way I had hoped by the midway point but happy to have been able to finish off my racing season running with Nicole.


A while back (not sure how long ago because weeks and days and months tend to roll into one another as I get older) I saw a funny blog entry about runners acronyms. I'm thinking it was on Shut Up And Run but again, I'm old and can't remember. One that stuck out to me was FII - F**k I'm Injured. I've had my share of injuries since I've started running, lots I've ignored, some I've gotten treated but nothing that has ever sidelined me. Until now.

Last week the tendon behind the inside of my ankle was feeling tight during my runs, but because I'm good at ignoring stuff I left it. Then on Sunday when I worked on my feet for 7 hours and then immediately went to the gym to run 2 miles on the TM to try out my new shoes it really started to bother me. Like I could hardly walk on Sunday night and my ankle swelled right up. I iced it and hoped like crazy that it would be fine by Monday morning. Surprise. It wasn't. Cue Kenny Rogers. "You've got to know when to fold 'em".

I called and got an appointment for first thing Tuesday morning with Kevin and continued icing and hoping. Dr Google told me it was posterior tibial tendinitis but I figured I'd let the real Dr make a final assessment. Turns out Dr Google had it partially right. It is the posterior tibial tendon but it's not tendinitis, it's a strain. So I got some ART and laser on it and was told to keep up the icing to get the swelling down ....

Kevin "Does that look swollen to you?"
Me "Yeah, a little bit"
Kevin "Uh, that's a lot more than a little bit swollen! Have you been icing?"
Me "Yes. But mainly staring and hoping that it goes away"
Kevin "Probably icing will work better than staring"

......and strict instructions not to run. Can I do something at least? Elliptical? Bike? I asked him. He told me that the bike would be the better option but only if it doesn't hurt. Considering when I said bike I meant spin I figured that would probably be a no and left it at that. Dejected I left his office and texted Derek to let him know that he was right and I wouldn't be allowed to do anything but wallow in my self pity. He asked me if I had even left the office before I posted about it on Daily Mile. LOL FYI I was at work when I posted. Just like my boss likes me to. ;o) 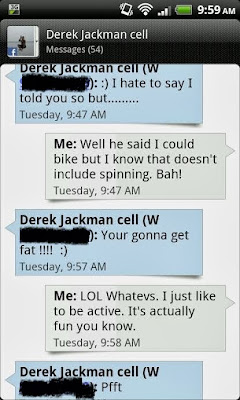 So now here I sit with a bag of frozen corn attached to my ankle and popping Aleve like crazy. Self imposed rest periods = no problem. Forced rest periods that I have no control over = driving me crazy! I'm thinking tomorrow I will swim with Mari as long as Kevin says that I'm allowed. Probably I should get permission from my hairdresser too.........