Obviously my marathon training is starting out as anything but marathon training. Dealing with two different injuries in January has been tough. My PF is still there but definitely not as bad as it originally was (considering I could hardly walk those first few days anything is an improvement!). It hurts but I'm hoping that by doing all of the things that I'm supposed to be doing it'll stay manageable if not go away completely. Unfortunately with all of my physio sessions my insurance is getting used up quickly. I'm going to need to cut back from that which means being extra sure to do all of the at home stuff:

Icing. This is the worst. An ice foot bath is better than just ice but OMG, I'd rather smear dog crap on my foot. To be honest if you told me that would help I'd probably do it.... Right now I'm doing this every morning and after every run.

Hot Epsom soaks. I love these. Noah keeps asking why the kettle is at the computer table. I just pretend I don't know what he's talking about while slowly taking it back to the kitchen. These I do in the afternoon.

Foam rolling. Seeing as tight calves are an issue for me I need to be extra diligent here. My DM friend Barb suggested using a ball too, just to get in there. I'll give it a try...

Rolling the arch. I actually find that this irritates things but if at the end of the day it helps I'm doing it.

Stretching & Strengthening. The heel drop on the stairs is supposed to be best. I was doing it until I overstretched and had to go into physio with my tail between my legs to tell him. I got the eye roll and 'You runners. Always thinking more is better' speech. I'm also stretching with a band like this: 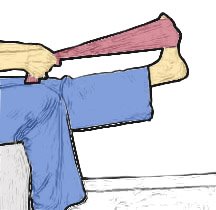 Strassburg sock. Yeah I bought one. It makes things feel better in the morning anyway and Derek hasn't noticed it yet. I can't wait to hear his reaction when he does. LOL

Physio. I was going 3x week. This week I'm down to two sessions. I think I'm going to try to drop to once a week next week. While there I get graston, ART, laser and then taped up. The taping really helps for work any way. I couldn't run that way, it immobilizes my foot too much. At the sports Dr's recommendation I asked physio dude to show me how he tapes it so I can do it myself too.

Feetures PF sleeve. I've been using this on my runs. I'm assuming that it helps somewhat because I wore compression socks instead of this on a 10k last Thursday and my foot felt like crap. I almost had to crawl out of work that night.

Anti inflammatories. I wasn't really taking anything but the sports dr suggested I do for a couple of weeks any way. I brought up the risks but he said that if I took two regular strength advils twice a day for a few weeks I'd be fine.

Scale back on the running add more cross training. I can not run 5 days a week right now. It's just not going to happen. I work on my feet and it's just not smart. When things start impeding your quality of life you need to adjust. So right now I'm running 3 days a week. Next week I'm going to try four with a couple of spin sessions and see how that goes. I need to keep my long runs in, obviously but the speed and hills need to go for the time being. I'm told that rollers are ok but hill repeats are not so that's what I'm going with. So I'm going to try running Monday, Tuesday (adjusted hills) Thursday & Saturday with spin on Tues nights and either Wednesday or Friday.

So hopefully this is enough to at least get me to ATB in one piece. Obviously my goal of 1:45 at Chilly is not going to happen but seeing as my goal race is the Ottawa marathon I need to get myself healthy for that and treat the others as icing on the cake.