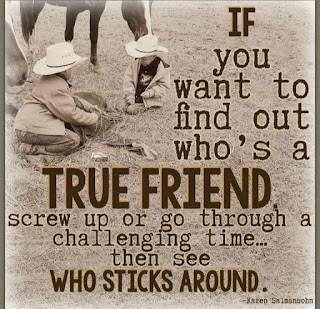 For 18 weeks less a day I was super excited for the Goodlife Marathon. I trained as best I could through the winter months, a chest infection and a sprained ankle and was feeling good about running a Nicole's BQ paced run. Then race day came and I just wasn't excited anymore. You know it's not going to be a good day when you say aloud on the bus ride to the start "I don't want to do this anymore".


The weather was miserable and I knew that my tummy was going to be a bitch. My heart just wasn't in this one but I lined up at the start line with Nicole and Ivanka, let out a big sigh and started running......in a rain coat from the dollar store that was the same material as a shower curtain liner. 1k in and I ripped that thing off like the Hulk. Or Hulk Hogan. Some sort of beastly creature that would tear a shirt at the neck any way.

I ran down unknown streets happy to let Nicole take the lead and silently counted off the kms. Only 40 more to go! Oh God. We ran halfway up a big hill and Nicole called a walk break. Right-o! I guess this was Hoggs Hollow? I have no idea but it wasn't as bad as I thought it might be. We lost Ivanka on this hill so for a long time I wondered how far ahead of us she was and how she was doing. Even though we didn't talk during the race it's nice to know that someone is there beside you, I wonder if she's lonely. Around 10k I started thinking to myself that I was never going to run another marathon. This was lame. The weather sucked. Running sucked. I sucked. Forty two kilometers sure as hell sucked. Nicole was cool though. She didn't suck. 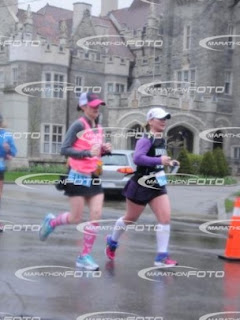 Shortly after this Nicole had to pull off and stretch her quads. I was happy for the break and my tummy was starting to ache. I pulled out some gingins and hoped for the best. We ran along some more, still in unknown areas to me. Some ladies asked us if we were doing the 10s & 1s method. "We're doing the whatever it takes to get through this method" I replied. I think my humour was lost on them as they ran ahead. Nicole asked how my tummy was. "I just need to get to the half" I told her. I had silently made a deal with myself to get to the half strong and then I could let Nicole go if I wanted. Sometimes it's easier to complete the task if you give yourself permission to have an out. I really wanted an out. This sucked. Finally we were running in the downtown area and I actually kind of knew where I was. This was exciting for me and gave me a bit of a boost. I continued to eat my gingins to help my tummy but at least I was no longer feeling like I didn't want to go on. I was going to finish this race, and probably run another, dammit! We finally got down to Lakeshore and my mindset was good. I knew where I was for once. I have never really been down here on foot but I've driven by countless times watching the runners go by on the trail. Nicole had to stretch her quads again and I silently waited. I could hear the finish line but I purposely didn't look over for it. What the eye doesn't see the heart doesn't grieve. A little while later my stomach started cramping and I couldn't face the thought of eating another gingin but then I remembered that I had thrown a prescription Zantac in my pocket at Derek's suggestion so I took that. I had to stop and walk again the cramping was so bad but then we went on running again. And then I had to stop again. Nicole's friend Peter ran by at that point so I told Nicole to go and run with him. "Why?" she asked. "I'm running with you". "I don't want to be the cause of another personal worst" I told her. See that's the thing. When it's my partner having difficulty and needing a break I'm all "No worries, take your time" and I understand and genuinely mean it, but when I'm the one holding them back it's an awful feeling. At this point a spectator in Boston gear jumped in with us. "You're wearing a donut on your shirt and you're wearing a beer! There's nothing you guys can't do!!". This was the little pep talk that I really needed at this point so I started running as he ran with us and he cheered us on. And then magically either by Boston Strangers vibes or the Zantac my tummy started to feel a lot better. Nicole suggested that we do 10s and 1s (for real this time) so we settled in to that and carried on. We watched the fast runners coming back along Lakeshore and commented how awful they all looked. Glad that we weren't the only ones feeling like garbage. All of a sudden Nicole told me that we only had 9k to go and I almost jumped out of my shoes I was so excited. I had no idea we were that far! Holy shit, I was doing this and I was actually feeling ok. We took another walk break and spied Ivanka up ahead just as Marlene passed by us with pity in her eyes (I actually laughed at the look that she gave us). At least all of us weren't feeling like crap out there. We ran for a little bit in the park, passed a large group of guys and then lost Ivanka right as we were turning into the wind. Or should I say THE WIND!!! No wonder everyone running back to the finish line looked so terrible. The wind was awful. AWFUL! I had secretly hoped that all of our windy day training runs would help us out with this element but we'd never run in the wind with 35k on our legs before so it did nothing.

Crap, let's just get this over with. I counted off each km and took the walk breaks that Nicole was calling. We even took the one at 41k that I would normally never do. We ran along cheering with the spectators that were telling us that there would be beer and donuts at the finish line (LIARS!) and thanking all of the volunteers that were out in this horrible weather. There are truly better ways to get your community service hours. Like cleaning toilets at the bus station.

Finally a girl walking along yelled to me "At the green light you're going to turn. The finish is right there". I wonder if she could see that I was trying to see where the finish line was?! "Run to the green light!!" I yelled to Nicole. This was seriously the happiest I'd been all morning. Finally a light was at the end of this gloomy, rainy, windy, shit show of a tunnel. I turned at the light and let out a sigh of relief. The finish line! I ran my ass off while Nicole posed for the cameras and finally crossed that line and turned and gave Nicole a high five. The original Shalane and Amy.