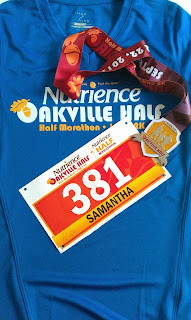 Apart from the LOOOOOOONG course last year, I really enjoyed the Oakville Half so when I realized that they had corrected the course to a proper 21.1 this year I decided to sign back up. And considering it's 10 minutes from my house, even if you sleep in you can still get there in time! Trust me I know.

I'm not going to lie. I was a little nervous coming into this race. Like any good runner I was starting to doubt myself. Last week my main speed workout was a fail. With a capitol F. Having your last speed work before a race not go so well is not confidence building let me tell you, even if I had been nailing every single previous one. I have also gotten used to running the tough ones with Nicole. How was I going to grit this one out without anyone there to hold me accountable. What if I shit the bed?! Or myself?! So many what ifs?!?!

Race morning arrived and I was able to get up on time. Already winning! I was able to eat all of my oatmeal. Woohoo! I was able to have a poo. Things are looking way up from last year! Then the girls (Amy, Patty and Emma) arrived to pick me up 10 minutes early and I had to scramble. EEK! I got in the car and muttered that I hoped that I had everything. "Chip?" someone asked. "Yep". "Bib?" asked another. "Nope!". *sigh* Welcome to my life. I ran back in, grabbed it and hurried out. Amy drove us to her friends house who lived right around the corner from the park and we walked over and hit the porta potties while the lines were still small. Then we milled around for a bit until Emma and Amy's 10K race began. (FYI there is a photo of us at the start but it's a hideous shot of me as was agreed upon by one of my hockey guys last night who is also a FB friend so it won't be shared) We ran into Pierre from Daily Mile and I was starting to ask myself what the hell I was doing here. Did I really want to do this? Wouldn't I rather be at work slinging eggs and pouring coffee right now? WTF? Hating a race BEFORE the race actually begins is a new one for me. I'll be alright I thought to myself. Just make it to the 16k mark where Nicole has agreed to meet and run me in. I had downloaded a couple of podcasts and borrowed Noah's headphones (after a long pleading session where he made me clean my ears - anal kids are the worst!) to keep my mind off of the boredom. Another friend from Daily Mile, Richard came up to chat and he asked what my goal was. 1:50 I told him. He said that would probably be around his finishing time too as his training hasn't been great due to work this summer. "Want to run together then?!" I begged asked him. He agreed! Someone to run with now?!?! Pfft I've got this!

The race started and we chatted about our sons who are both in first year university while we dodged a few people, but not many. Richard spoke about how he is traveling so much with work right now and I told him that I recognised a lot of the streets that we were passing from blueprints that come across my desk at my morning job. I told him that I like to walk the water stations and he said that he did that with Nicole at Mississauga and he thought that it worked well so he agreed to this part of my plan. The first 5k were easy peasy lemon squeezy even if Lakeshore did get a lot hillier from the last time I ran it.
5:12 4:58 5:03 5:06 5:03

The next 5k had their challenges. There is a bit of a hill around 8k that absolutely gassed me. No idea why but my breathing was crazy and I felt like I was running on empty once we got to the top of the incline. I told Richard that I would have to gel at the next water station and he said that was fine, he was getting a foot cramp so he was going to loosen his shoe while we were there. I suggested that he get some Gatorade at the water station to help with the cramp. We hit the station, did what we had to do and were off. Not sure if it was psychosomatic but I felt a ton better once I had that gel in me. Richard asked me if we were on pace and I told him that I had no idea. I go into races only knowing what pace I'm supposed to be running. I can't dissect it. That doesn't work for me. I wanted to be running 5:10/km or better and it seemed to me that we had been so everything looked good.
5:05 5:05 5:12 *hill* 5:18 *gel break* 5:01 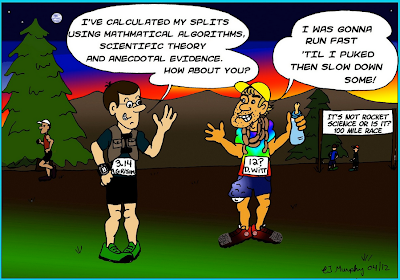 Halfway there! I knew that I could finish this even if it was getting tough. Conversation on my end dropped off a little bit and with his gimpy foot Richard kept asking how I was doing. Doing alright. We were in residential areas for a bit here so Richard interacted a lot with the spectators to keep himself occupied seeing as I wasn't holding up my end of the running partner bargain. I thought it was funny that he asked if he was embarrassing me. Obviously Richard has a teenage daughter at home! We soon saw another Daily Miler, Kim on the sidelines cheering and she snapped our picture and came and ran with us for about 500m.


I introduced Kim and Richard and told Kim how excited I was for the Run For The Toad relay that I am doing with her, Emma and Phil in a few weeks. Then Kim wished us well and turned off to finish her run and let us get on with ours. Richard was getting a little concerned that he would have to stop and stretch out his foot as the cramping was getting quite bad, but at my suggestion of more Gatorade the cramping soon gave up and went away. Yes! We encountered a little bit of a headwind down Rebecca but it didn't seem to last long thankfully. We hit the 15k water station (I had been noticing that the volunteers kept talking about how they liked how I will make eye contact with the person holding the cup that I want and will point to them so they are ready for me. Doesn't everyone do this?) and set our sights on pushing on and meeting up with Nicole at Rebecca St. Renewed energy to add to our team? Yes please! Richard again asked me if I thought that we were on pace. I think so I said, Nicole can probably tell us when we get there. She knows that stuff!
4:54 5:10 5:03 5:03 5:11

Right on schedule there was Nicole in all her purple glory waiting to jump in with us. She had a bottle of water and right away offered me some (I guess just by looking at me you could tell I was working hard) but I told her we just had some. Thanks anyway. I was pretty tired here and not talking a whole lot. I did take the time to notice that Nicole had worn her running skirt to come run with us, although I didn't mention it. That would take up too much energy. She did point it out at the end of the race to which I told her that I had noticed it right away. I worked at the mall all through high school, I always notice this stuff! Richard asked Nicole if she thought we were on pace and she asked how she was supposed to know?! Uh oh! I guess only time will tell because I have no idea. I'm trying to do the math but its not making sense. I think we'll come in way under 1:50 and I feel like crap so that can't be right. "You guy's are doing great!! Only 5K to go. We don't even run 5K anymore!" Nicole said to try and put my head in a different space. Don't worry I thought to myself, I know that I've got this. Nicole spotted a few race photogs as we turned down Jones and did a few poses for them. Guess we'll have to look under the 'Unknown Runner' section for those. There was a race volunteer who told us to run all the way down the street. "Right into the lake?" Richard asked him for a joke. Turns out the joke was on Richard because as we turned onto Marine Dr he kept going straight! "Not right into the lake, Richard" I laughed at him. My legs were dead but I knew that the end was near so I just kept moving to stay with Nicole and Richard who seemed to be getting more energy with every step that he took. Obviously he had way more gas in the tank than I did at this point. "It's your race too" I said to Richard "Go on. Don' t let me hold you back! I've got Nicole, I'll be fine". I could see the inner struggle but we were finally able to convince him to take off.....only to turn the corner and find him waiting for us. "What happened we asked?!". I had visions of his foot cramp flaring up again. "I started this race with you so I'm going to finish this race with you!". He said. What a great guy Richard is! We soon passed the 20K sign and then Nicole waved us on with instructions to smile for the camera. "Come on Samantha! Show me that finishing kick!" Richard said to me. "Alright, but let me win ok??!!". We came flying down Lakeshore and saw Emma and Amy cheering us on (who both ran awesome PB's at their races!).


Just as we were turning the corner into Coronation Park one of the guys on one of my Wednesday night hockey teams yelled out to me (his name is Trevor and he finished in 1:39!) "Hey Rich......." I stuttered. Not his name. Brain isn't working. Just run! Richard and I flew down the finishing chute, I heard the announcer say my name as Richard told me to look at the clock. 1:47:xx?! I smiled in elation and high fived Richard as we crossed the finish line! I can't believe we did it! Thank goodness for running friends again this day, they truly help you stick through the tough parts! I only hope that I am there for someone as much as they have been for me someday!
5:04 5:02 5:09 4:56 5:05 4:58 4:05 *final 170 meters