So yesterday I wrote a post all about my week with PF but Blogger decided to eat half of it. Since then I've decided to change the content of the post up. It would seem that a lot of people that I know, both runners and non, have or do suffer from plantar faciitis and seeing as the internet is my playground I've also spent a lot of time on Dr Google, so now this post is going to be about some of the things that I've learned, both good and bad about PF.

Nicole and Sarah have given me a lot of advice over the last week. The best piece of advice that I received from Nicole is to wear my Birks in the house. I wish that I could work in these because I can't even feel my PF in them! (Work is the worst for me right now, Sunday and Monday were brutal with the discomfort) Thankfully I bought a brand new pair of Birkenstocks on Boxing Day (50% off!!) so my husband can stop dropping comments about me dirtying up the floors with my runners. Sarah suggested that because insurance runs out so quickly we should get together and take physio courses and treat one another. She has volunteered to do the graston. Who wants to be first?

A girl at work who had issues with her ankles this past year (still unknown as to what the problem was and she saw multiple doctors) suggested that I soak in as hot as I can handle epsom salt foot baths where there is so much epsom salt in there it no longer dissolves. I guess I'm going to have to hit Costco for their jug of epsom salts, I'm thinking the 2KG one that I get from Shoppers isn't going to cut it anymore. Another girl at work suffered from PF a few years ago. She's a bit of a doomsday girl so obviously I braced myself for when she found out the I had it. "You're going to have it forever!!" "The only thing that worked for me was shock wave therapy". My physio guy will be so happy to hear me asking about this tomorrow. Every day that I've gone in there I've bombarded him with things that people have told me about. Apparently it's a little early for me to be thinking about dropping the money on a Strassburg sock. Also apparently most of his clients have found that it doesn't help. Sarah said the same thing. Of course I'm sure that I'll still go out and buy one. Also I read that I'm supposed to really be digging into the arch of my foot with a ball. Um yeah, apparently I'm NOT supposed to be really digging into the arch of my foot with the ball. I learned that lesson the hard way because graston frickin suuuuuucked yesterday from the tenderness that I had created. I've never been so happy to hear the words "last one" as I was yesterday.

Trolling around the internet has taught me that I may as well give all of my running stuff away to someone who can use it. It has also taught me that if I stretch I can get rid of PF in one week. It has shown me 5000 different ways to tape up my foot, 50,000 stretches to do, and 50,001 reasons not to do stretches. It has let me know that I should take 500mg of magnesium at bedtime and that I should not take more than 350mg of magnesium a day. Barefoot shoes are best for people with PF and barefoot shoes cause PF....

So what have I learned through all this? Not a lot other than Plantar Faciitis sucks and nobody's got time for that!

Here we are January 2nd, and I'm sitting here with my post tib flared up and a different spring race plan. It turns out that Derek's cousin is getting married in Ottawa the first weekend of May, which happens to be the same weekend as the Mississauga Marathon. Seeing as this cousin was one of the handful of people who attended our wedding, missing it is not an option. As soon as I realized the conflict I scoured the internet and found a few spring marathon options; Waterloo marathon, Whitby marathon, Glass City marathon & Ottawa marathon. I didn't read very many (any) favourable reviews of Waterloo so that was out. Whitby seems to be a double loop so while doable it wasn't high on my list of things that I wanted to do. Convincing Derek to go to Toledo Ohio for Glass City didn't seem like it was going to be easy so that was taken off the list which left Ottawa. Unfortunately Ottawa is the same weekend as Sulphur Springs but Nicole was happy to take my place and run with Emma so even though I run the risk of running a marathon in hot weather (Sam & hot temps don't go hand in hand) this is my best option. Another plus is that a lot of Daily Mile friends seem to be going out to run as well, including Cam who is running his first marathon at Ottawa and may be willing to run with me. If not I'll have to find a pacer and stick to them, either way I'm registered and have a hotel room reserved so Ottawa, I'm coming for ya! Unfortunately Mississauga has a strict non transfer rule so I'm out the fee that I already paid for that marathon which kind of bothers me and I let them know this quite politely. Come on, Toronto Goodlife lets you transfer the registration. Boo Mississauga! 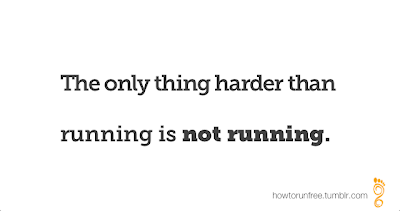 In other news my posterior tibial tendon is making itself known again and my usual physio guy is not around until next week so I booked an appointment to see a sports medicine dr this morning who has some pretty nice credentials. Hey, if he's good enough for the Toronto Rock, Hamilton Ti-Cats & McMaster Marauders I think that he's good enough for me. Although he is unsure of why it's flaring up now he feels that my problems lay with the fact that I can't even walk without wobbling so I need to focus on strengthening things up in my ankles. He gave me a couple of exercises that I need to do religiously and go back to see him in a month. Worst case I'll need to wear an ankle brace when I run, but because it doesn't bother me while I'm running, only later, I'm allowed to keep at it. He says that he sees no reason why this should hold me back from running Ottawa. I'm a little worried that it may affect my speed which will obviously make running a 1:45 at Chilly quite difficult but I'll try to focus on the positive here and that's the fact that I'm allowed to run. Of course today it is snowing with a temp of -28* so maybe I'll take an extra rest day before I rush back at it.