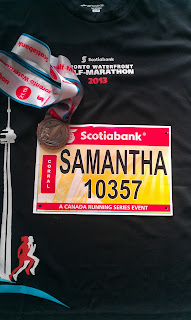 It's pretty easy to say that this race began where last years ended. I had a terrible time at Scotia last year and I vowed to go back and fix that. I said the same thing about Midsummer too but unfortunately this year was just as sucky as last year. Was the same thing going to happen to me at Scotia?! Two crap years in a row?!?!
Nicole and I have been training for this race ALL. SUMMER. LONG. It was a scary thought, running a 4:58/km pace for 21.1 straight kilometers so when Nicole texted me at work on Thursday night to say that Kenny had agreed to pace us we were over the moon. Then nervous. Holy crap! Were we actually going to pull this off?! It was now looking like we just might!
On Friday I picked Nicole up from work and we headed to the Expo. Once again I handed over $14 for parking for the 'free expo' and we headed inside. We got our bibs (which they really need to jazz up!!) and joined the long line to get our chips activated. The expo was kind of a let down but we did get to talk to John Stanton. He came up to us as Nicole was trying to find the 3:30 marathon pace band. Seeing as I am a fly by the seat of my pants racer I couldn't be bothered to take one, although when John Stanton hands  you something you take it dammit so one ended up in my bag. Nicole didn't notice who was talking to her at first and I could literally read the thought bubble over his head "Look up! It's me! John Stanton!" 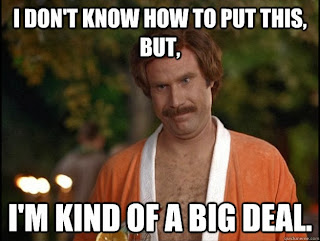