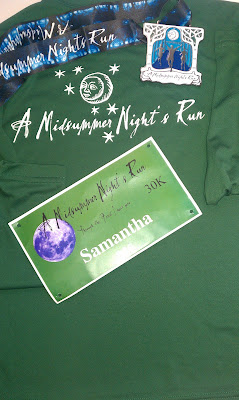 Alternate titles for this post could be I thought that bird crap was supposed to be lucky! or I want those 320 meters back! So we all know that this was my biggest race for the year. Thirty kilometers! Yowza. WHAT THE HELL WAS I THINKING?! This race was long and it was hard. Can you even imagine that while riding the shuttle bus on the way to the race I was actually thinking that I may just change up my half marathon entry at Scotia this fall to the full! F********K!

The race didn't start until 5:30pm which kind of sucked because I couldn't do anything all day. I was also a bit worried about running at night because I'm a morning runner. I didn't really know when to eat and I felt like I couldn't do much because I didn't want to tire myself out. So I walked the dog, watched tv and napped. Real productive! Around 3:30 I went and picked up Sarah and Maggie who were driving out with me and we hopped onto the highway. Then we quickly hopped off. Hello traffic! Thankfully the congestion didn't last too long so by the time we ended up getting to the parking lot and boarding the shuttle bus it was 4:30. Plenty of time to hit the porta potties, check our bags and get ourselves together. We sat in the grass and had a banana and I hummed and hawed over whether I should wear my Bondi Band or a hat. I eventually went with hat so that I wouldn't have to wear sunglasses and thank God I did! At the end of the race Sarah kindly informed me that I had bird crap on my hat! GROSSSSSSS!

At about 5:15 we split up to find our pacers, the girls going out with the 3:15 and me in search of the 3:00. First I found the walk/run pacer but turned around to find the continuous. I eventually found him gossiping with some friends and Nicole who I had been keeping an eye out for since we got there. The pacers name was Paul and according to him he was super fast and not happy to be running such a slow race. Awesome! I will say that he was super funny and really helped the time go by even if he did keep going on about how much this race sucked,  how going this slow sucked, he was sick of people passing us, and remember everyone, the race is won in the first kilometer. LOL Being the nosey girl that I am I totally looked him up on Sportstats. Yeah, he's alright. :oP
The first 21 kilometers of the night flew by and I was feeling great, even if a large portion of it was spent running around the 15k walkers, or in a couple of cases, right up the back of them. This was a big sore spot for me. Stay to the sides, don't walk 3 abreast in the middle of the path! Gah! It didn't take long for us to realize that this race was not marked properly either. The km markers seemed to be about 150 meters ahead of where they should have been which was really screwing up the pacer. He kept thinking that we were ahead of pace and slowing us down. Around 18K I saw a photographer up ahead! Finally, my chance for a decent race shot! I quickly wiped the sweat from my face, smoothed my bib and looked up to see 3 15k walkers stopped and posing for the camera! These walkers were getting on my nerves so bad, they're lucky that I didn't photobomb them with a punch to the throat! Finally around the 21.1 mark (2:06:13 was my time.....better than my Toronto Women's Half time!) we broke off from the 15Kers and were off to do our last 9K. Unfortunately this was also around the time that the battery on our pacers Garmin died and the run started to go downhill. He announced that we were going to be pushing the pace to 5:50 and sped up. Too bad he was speeding up to a 5:30 pace! At the 23kish water station I decided to have a gel and walk for some water. This was where I lost the pacer and Nicole. My legs were really heavy but I just worked to keep a 5:55-6:00 pace and finish strong. John Stanton facebook posts pretty much got me through the last part of this run. LOL Races define your discipline or regret, with you as the author......your most valuable asset will be the willingness to persist when you feel like stopping!.......Be the runner you dream you be..........Arriving at the finish is often accomplished by runners who kept on trying when there seemed no possible way at all, how precious their finish. As it was now just me & John Stanton my watch beeped 26k. Yay 4 more to go, I could do this. Then about 500 meters later I passed the 26k marker. Same again at 27K. And 28K. What? First the markers were short, now they're long?! Just when I didn't think that things could get any worse! I could quickly see my 3:00 time goal slipping away with this extra distance and was so pissed at this race for screwing me over! At least my phone ringing took my mind of things around 28k. Seriously, Noah? Again?! This is now the third race that he has called me in the middle of! (Just in case you are interested, no I didn't answer.) At 29k I passed one of the guys that was with our pace group. He was walking. I reached out and touched his shoulder and said "Come on, we started together, let's finish together". Unfortunately he had a cramp and couldn't do it. Then a girl yelled out to me "Way to finish strong 30" (I guess I was in a group of 15ks) so I gave her a thumbs up and ran all the way to the finish line with my hands in the air. I did it, 30.32 kilometers. Thank God that's over was all I could think!!!

At the end of the day I didn't officially make my time goal, but when my watch beeped 30K I was at 3:00 so I'll take it. I probably wouldn't run this again.....well maybe the 15k but I doubt the 30k. I hate out and backs and the terrain pretty much sucked. The walkers were annoying and the time of day wasn't good for me. The medal was cool, and I liked the water bottles that they gave out at the end, but the shirt was kind of yucky. I like black, pink or white. Not green. I loved running with Nicole and the laughs that I shared with Sarah and Maggie at the end. The pacer made me laugh and that was cool. As I explained to Sarah this race was kind of like childbirth. LOL I will try the 30k Around the Bay in March and see if I can do better at this distance. Maybe at least finish without wanting to cry. LOL Oh, and I checked on my pacers finish time. It was 2:58:46. I'm curious to know how many of the group were able to keep up with him until the end. I have stalked the pacers photos and I don't see anyone running along side him at the finish. Hmmmmm.﻿
Posted by Sam at 2:13 PM