While it feels like only yesterday I was contemplating doing this race, the Midsummer Night's Run 30K is almost here. This Saturday at 5:30pm I'll be lining up with the 3 hour pace 'fairy' (it is very Midsummer Night's Dream themed) and crossing another race milestone off of my list. **so exciting** I've worked really hard to train for this run and I'm hoping for a fun time. I've even enjoyed 'ice baths' in the lake after a few long runs. Well, until someone told me that there is blue mould in Lake Ontario. Yikes. 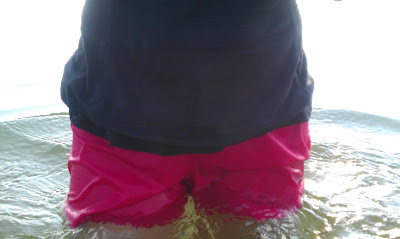 It looks like there will be quite a few Daily Mile friends out there too so that just adds another dimension of awesome to the night! Hopefully deciding to not book off Sunday morning from work will not bite me in the behind! I'm excited for the Steamwhistle Beer Garden after the run!! **so exciting**


I bought compression socks today too. The man who was helping me at the Running Room saw my black toenail and called it my 'trophy toe'. I'd rather have a medal. LOL I went in just wanting the sleeves because I hate wearing socks, but they were not tight enough on my ankles so I got the bright pink CEP socks instead. 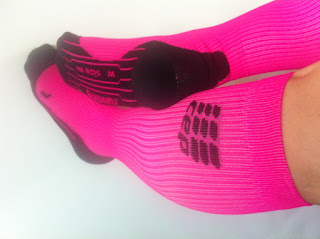 While I would like to wear them on Saturday to help me get through Sunday's shift, I've left it a little late and obviously won't get the chance to try them out for a long run before then. Maybe I'll just throw them on afterwards. They'll go great with my running skirt that I bought for the race.
Yeah...............probably a bit too much pink.....................