MNR week # 1 AKA Darnit Mother Nature, there's a reason that I run in the mornings!

Since Friday was a PD Day for Noah I decided to bump it back a day rather than leave him home alone for an hour and a half. I was all ready for my long run on Saturday morning but Mother Nature had different plans. It pissed down with rain for the entire morning and a good chunk of the afternoon. I hate to run in the rain at the best of times, and to do it for 90 or so minutes just isn't going to happen. So I figured that I would just do it once the rain ended in the afternoon. Yeah. Right. I'm not sure who I thought that I was kidding with that plan. The reason that pretty much all of my runs are done first thing in the morning is for one reason. I. Am. Lazy. Very lazy. One of the reasons that I got a dog four years ago (other than the fact that I love dogs and their unconditional love) was because I would have to walk him twice a day therefore forcing me to exercise. I run first thing in the morning because the only real reason that I can come up with not to run is that I want to sleep longer. Usually I can beat back that excuse alright, but in the afternoon or evening there are 5000 other excuses that I can draw upon to not do something. That is exactly what happened on Saturday. I had to take Kyle out to practice his driving (G2 test coming up Wednesday - Lord help us!). I had to walk the dog. I had to paint my toenails. I had to watch both episodes of last weeks Hell's Kitchen. I had to do pretty much everything but run in the stinky heat. Boo on me. Thankfully it's only the beginning of the plan so it shouldn't hurt me too much. And doubly thankfully there is no rain forecast for this weekend! 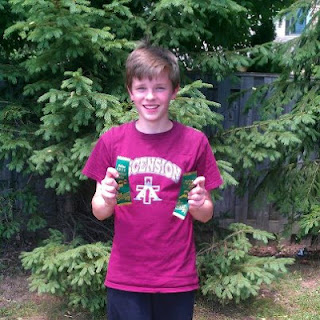 And he still wants to run a 5K with me. He brought it up again on Friday when we were fixing up the garden. So the plan is right now to go out and run 5K together and then see how he feels about doing a race. I'd love to do a race with him, but 1) he is lazy like me! and 2) he is a sprinter. I think that maybe we'll try doing 5's & 1's to start and see how that goes, hopefully vamping it up to no walking. I'll let you know how it works out!

I got this water bottle in my race kit for the Toronto Women's Half the other week and finally tried it out at work today.

I've seen them sold at Longo's for $10. What a waste. This was weird to drink from (I had to suck on air half the time before I got any water) and then when it was almost empty it folded over and spilled water on me. LOL If you've seen these water bottles and have been curious, take it from me. Don't bother! :o)