A challenge and a plan and another plan

Amanda over at Run to the Finish is hosting yet another 30 day challenge. This month it's the Green Smoothie Challenge. I've been pretty lazy with my green smoothie's lately so this is a good way to get back at it. Of course there was only 1 scoop of protein powder left in the tub today so being the nice mom that I am (don't ask my boys to confirm this!!)  I left that for Kyle and went without. Amanda's got lots of good ideas for things to throw in there which is good. I usually just toss whatever fruit I have with the spinach & frozen berries and am pretty happy with that. Seeing as lunch is the hardest meal of the day to get into myself this is where the smoothies are coming in. Of course I'd much rather have the potato chip sarnie or sleeve of cookies, but unfortunately my body would rather have the green smoothie. Boo!


So tomorrow is the Moon in June 5K. I'm kind of MEH about this race but who can blame me after running a half marathon less than a week ago. I'm really hoping to at least get a new PB out of this race. My A goal is to finish in 25 minutes, my B goal is to get a new PB (currently 26:46) and my C goal is to have fun. I know quite a few people who will be there, and it's also a friend's first 5K so it should be a fun night. I took my new Garmin out for a spin yesterday (my friend Anita's loss is my gain. She is having issues with her feet and can't run as much anymore. Plus she just got a smart phone and is enjoying running & biking with that more) and my paces looked pretty decent. I think that with the speed of the people around me I should hopefully be able to make one of my goals...... 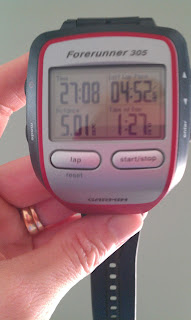 I took the plunge this week and signed up for two new races. The first one is the Scotiabank Toronto Waterfront Half Marathon (I'm not ready for the full yet for those of you who were hinting) and the second is the Midsummer Night's Run. Yep, I'm fully committed now. EEK! Actually at this point I'm feeling pretty good about it, excited even to be doing something new. My training plan is a bit of a hybrid between the Runner's World Smart Coach Marathon plan and the Around the Bay 30K training plan. I've tweaked it here and there and am pretty happy with it. For now. Being a woman I reserve the right to change the plan at any given time. I've also decided that I'm probably going to do the Oakville Half in September rather than the Milton. Nicole says that Oakville is easier and it is also closer to home so I'm thinking that Derek could just drop me off for the start and come home for a couple of hours until I'm done. We'll see though. I'm still reserving the right to change my mind.