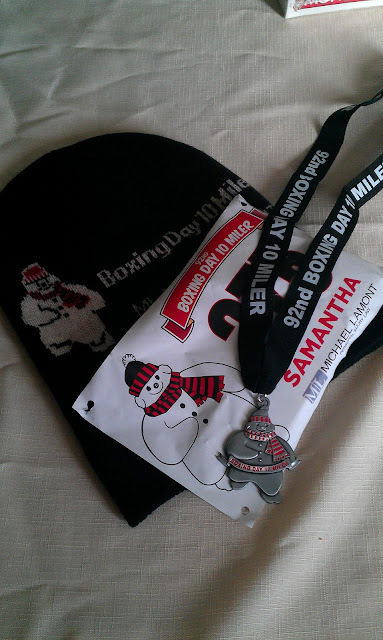 So I won't lie. The whole reason that I wanted to run this race is because I think that they have cute medals. If this is wrong I don't wanna be right! The only thing that was holding me back from registering was 1) I love shopping on Boxing Day and 2) Boxing Day is our Christmas at my dads. But then I realized that 1) the race didn't start until noon so I could fit it in along with shopping and my dads and 2) Patty was willing to run it with me. Merry Christmas! Sign me up!

I woke up Boxing Day feeling a little bit less than perfect. Busy shifts at work, a big Christmas dinner, sweets, booze and lack of sleep the past few days & nights were not perfect prerace form. I sent a text out to Sarah on my way to the Boxing Day sales that sh*tting my pants just may be in the cards during the race. Ah the good ol' race fear of mine; crapping my pants.

My shopping goal this day was to get to Factory Shoe's 50% off sale early enough for them to still have my size in Uggs. I thought that they opened at 9am so I was a little shocked when I arrived at 8:50 to find the place buzzing. Turns out they opened the doors at 7:20! Thankfully my wishes were granted and they did have my Uggs. Yay! I scooped those up along with 2 pairs of New Balance shoes size 7.5D AKA Flintstone Feet and did my best to find the end of the lineup to pay. One hour and 3 minutes later I was finally at the cash register. Yikes! Time was ticking away and I'd just spent over and hour on my feet. I had just enough time to head home, change and pick Patty up. Thankfully the predicted snow had not started yet but the crazy 45km winds had. And they were cold! What to wear? What to wear? I settled for my Lulu running pants, Smartwool socks, my long sleeved Lulu Swiftly and my Lulu Define jacket. You're welcome Lulu shareholders. I also brought along a water bottle that fits into my jacket pocket because Beth said that in the past she'd seen people filling up cups at the water stations with hoses from peoples yards! I didn't need creepy water adding to the crap my pants factor!

Patty & I arrived at about 11am and found some fairly close parking to the start/finish area. We walked over to the YMCA to pick up our race kits (a toque that I probably bitched about being too masculine far more than Patty wanted to hear, our bibs & a very small sized Cliff bar). Kind of lame but the registration fee was fairly low so I can't expect complete awesomeness. We hit the usual long bathroom line and snapped a quick picture.

I'm not quite sure what was up with this Y only having two bathroom stalls in the change room. Even my gym has about 10 and it's a fraction of the size of this Y. That smelled. Frickin terrible! Ah, the good ol' Hammer. We went back to the car, threw our manly hats into the back, gelled up and put on our gloves. I was starving at this point and feeling a bit of a tummy ache coming on. Not the way you want to feel right before a 16k run. We then made our way to the start line where we saw Paul & Mari, two daily mile friends. And then, quite uneventfully the race started. We hadn't even hit the start line yet when some dude who in my mind I named 'Gunther' decided he needed to elbow past me. RUDE! IT'S CHRISTMAS! We passed him a couple of minutes later. Good thing that you got ahead of me just so that you could run slowly in front of me! Wiener! There was a lot of congestion until we got to Bayshore Park but we were still able to keep the 5:30/km pace that we were aiming for. The goal of this race was sub 1:30. At Bayshore the wind really let its presence be known and it sucked! I think that out of all the directions that the wind was coming at us during the race, the sideways wind was the worst. Patty & I didn't talk much except to let out a 'certain letter bomb' every time a wind gust came up. As we were coming out of the park I noticed a guy come barreling out of the lone porta potty that was on the course and immediately was reminded that I just may crap my pants. Stupid porta potty! If you hadn't been there I would never have thought about it. Thankfully a nice long hill soon came up to take my mind off of things. We huffed our way up silently thanking the Gods for not sending us into a headwind at this point. Time was going by fairly quickly for me and I was recognizing a lot of points along the route from when we ran it as a long run a few weeks earlier. It's nice to know where you are on the route rather than just blindly running along I think. Shortly after 10k Patty felt that she couldn't keep up with the 5:30 pace that I was trying to keep us to (at some points she'd yell at me for going too fast...sorry!) so I went on ahead. I was still feeling pretty good, but soon the Chedoke Hill came along and I wasn't feeling so great any longer. I got about halfway up the hill and I stopped and walked and drank some of my fresh from home water. I made my way to the top, ran to the water station and took a Gatorade (see Kyle, longer races DO have it). Two sips and I was ready to get back at it. Now we were running on a muddy trail and the footing wasn't the best. Neither was the headwind. Once off the trail there was a nice downhill which I took advantage of WEEEEEEEEEEEEE. After this things kind of sucked. No matter what direction I ran from the point of the trail on it seemed that the wind was in my face. My legs were also getting tired and the stupid elf that I had been trailing for most of the race was getting away from me. A couple of cars had also somehow gotten onto the closed side street that we were running along and one kept trying to pass me. Seriously? Thankfully a turn came up and I was able to get away from him. And then couple of turns later I was passing my car! It was kind of bittersweet because while I knew that I was close to the finish I was also longing to just be finished and sitting inside of it. Soon enough I was crossing the finish line and receiving my coveted snowman medal! About a minute later Patty came through and we decided to just go straight home rather than going back into the stinky Y and getting some soup. On the way to the car I spotted Gunther taking a picture of an older couple who I assume were maybe his parents. If I didn't resemble the Joker with my red sweaty face and purple lips I'd have photobombed that guy! Elbow me will ya? We also saw a guy run by in a Christmas tree costume. At least someone had some Christmas spirit, unlike me & Gunther. All in all I had a fun time despite the nasty wind, and at least it waited until that evening to snow! And I didn't crap my pants! Yay!
Posted by Sam at 3:48 PM