What do you mean it's 6am on Christmas morning and my family won't be up for hours?! Being the only early riser in the house truly sucks some days. Oh well, it'll give me the chance to post something witty and meaningful here. Ok, it'll give me a chance to put some words up and make me feel better about my lack of blogging lately. With hockey season in full swing I still have no spare time to get on here, and when I can someone else is on the computer. You would think that with two laptops and two PC's in the house there would be enough for everyone but for some strange reason the computer in the living room is the only one people want to use around here. Not that you really care about that, but hey, it's 6am I'm allowed to ramble.

I took part in two online Secret Santa's this Christmas. I just missed signing up for Courtney's Sock Swap last year so I was happy to get in on that this year. I also did the Daily Mile Secret Santa. Hopefully both of the people who I played Santa to have received their gifts in time! With the price that I paid for postage that stuff should have arrived the next day! Yikes! I bought for Hannah for the sock swap and Leana bought for me. I received a really cute pair of Christmas socks, a Lulu headband, some soap, Gu and Nuun. Yay! Totally awesome gifts, thanks so much Leana! I'm hoping to wear the socks tomorrow at the Boxing Day 10 miler but they're calling for snow so I may have to stick with my Drymax wool socks. Thankfully every time I check, the forecasted accumulation goes down. First it said 30-40cm, then 20cm, then 15cm and now it says up to 10cm. Keep it up weather man! 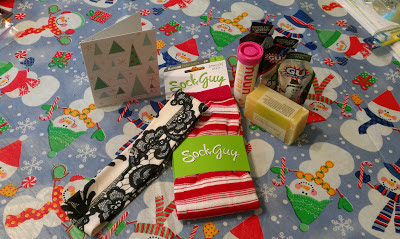 From my Daily Mile Santa I received a really cool box of tea from David's Tea. I've never heard of this store but a lot of people commented on how great it was when I posted a photo of it on DM. I haven't tried any yet, but I will. 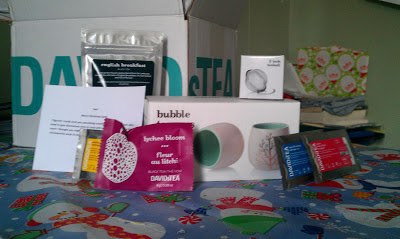 Merry Christmas to you all! I hope that you have a wonderful holiday and all the best for 2013!