Week 1 of half marathon training!


My first week of half marathon training has gone relatively well. Really, the only thing different was bumping my long run up to 13k. Talk about being super proud of myself when I got home from that one on Saturday! The run was a bit cursed mind you.  I had downloaded a podcast to listen to the day before and then as I was about to leave I realized that it had disappeared from my phone. After a bit of farting around I just ended up downloading it again but this put me about a half an hour behind schedule. I run a tight ship, half an hour is a big wrinkle in my day! Anyway, with the podcast finally dealt with off I went into the  -15*C weather to run my 13kms at a 6:43 pace as the Runners World Smart Coach tells me to do. This is a slow pace for me so it’s not a comfortable start but the podcast is keeping me fairly amused so I soon settle into my groove. My goal today is to run to the end of the trail that runs from just off my street down to about the midpoint of the city. This is generally the path that I run on because it has some rolling hills and it’s a straight out and back. I like to run straight out and back rather than a loop, it always makes the run back seem way faster. The cold isn’t bothering me at all; unbelievably I’m dressed properly for once. Thankfully I put on running tights underneath my running pants because the way back was straight into the wind and the pants alone wouldn’t have been enough.  I made it to the end of the path (YAY!) only to realize that there is a sign that says that the path continues in .03km across the street. Huh? 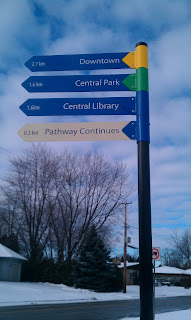 Well now I know where I can go on my longer runs, but I’m already 6km in so I’ll leave discovering that for another time. Once I hit the 6.5K mark I slow down for some water and jelly beans, almost breaking my teeth on the beans because they’ve frozen in my pocket. Next time I think that I’ll have to keep them inside of the handy gel pockets that Lulu puts into the waistband of their running pants/shorts. Hopefully my body heat will keep them a bit warmer making them a little easier to eat. Unfortunately at around the 9K mark my phone starts beeping that my battery is low. Crap! I’m running the podcast in a different program than my Runstar app and between them they’re draining all of my power. I turn the podcast off and start praying that I can make it home, but my words fall onto deaf ears and everything shuts down around the 10.5k mark. Boo! Now I’m really just hoping that nothing happens to me because I won’t be able to call home for help if it does. Oops. Thankfully the rest of my run is non eventful and I make it home in one piece. After stretching and eating I hit the Runkeeper website and edit the map to find that I actually ran 13.4kms! I kind of guess the time to be about 1hour 26 minutes judging from the pace and duration from the last time Runstar spoke to me, which gives me a pace of about 6:25. It’s not the 6:43 that I was supposed to be keeping, but considering I’m a natural negative splitter (crazy!) that’s probably where it came from and I really don’t think that I want to be messing around with that talent! Now tomorrow I have another 13kms to run. Hopefully things go a little smoother this time around. Mind you, we had a snowfall yesterday so I don’t really foresee that happening....the trail was pretty slippery today.


Tuesday January 17- run 7k intervals on the treadmill at the gym. Rainy foggy day. Felt like a             suckhole everytime I saw someone go running by outside!


Thursday January 19- spin 1 hour with 1 mile on treadmill to warm up. This was the hardest spin class ever! My legs were like jelly.