November was a pretty lax month for me. I was feeling really burnt out after running Road 2 Hope and my monthly stats for the year are proof 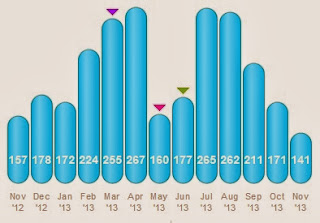 My lowest mileage month in a year! I've been having trouble getting out of bed a lot which has really affected those numbers as well as various other reasons. I have been hitting up the 50/50 spin ab session at the gym on Tuesday evenings all month though so at least that's something. I've always enjoyed spin but fitting a class time in with my schedule is not easy because my gym switches times around like underwear. I'm hoping that this class sticks around on Tuesday nights though because I'm planning on changing the 6th run on the marathon training plan that Nicole gave me for spin. I don't think that my calves will hold up for 20 some odd weeks of 6 day/wk running. I have also been thinking about joining Mari at the pool on Wednesday mornings but haven't actually had the guts to go there. I used to love swimming and was very good at it, making it to provincials more than once for back, free & IM. One of these mornings I'll go. First I have to see if my bathing suit still fits..........eek!
I bought new shoes yesterday. The NB 870s that I got in August are just about shot and the toe box is not a good fit for my Flintstone feet and my toenails are paying the price. *sigh* I've been unable to find any NB 1080s locally in my size for ages, actually any NB's at all other than the 870s which I'm not going to buy again. I went down to Foot Tools yesterday and tried on a few different pairs of shoes and left with the Saucony Ride 6. 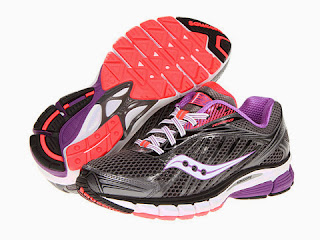 I'm a bit nervous, I've never run in anything other than NBs. I plan on hitting the TM at the gym tomorrow for 5K with them on to see how they are. Obviously I didn't wear them for our hilly 20K this morning but I did wear my new MEC thermal tights which were great. Everyone else said that they had a cold bum when they were finished but not me. I was toasty warm, sometimes a little too toasty.
So that's my November. Not much to tell because not much went on. December will be a better month. I'll be bringing my mileage back up for marathon training, starting with placing my alarm clock out of reach of my bedside table. I've been crazy with the snooze button lately. I used to never hit it at all, and now I'm at the point that I'm still asleep the first couple of times that I'm hitting it. Yikes. Bring on December, and advent. Peace be with you.
﻿
Posted by Sam at 3:57 PM