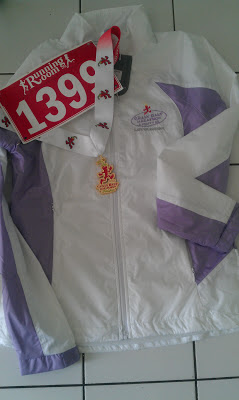 So obviously the whole mystic has  been taken away as to whether I made my time goal or not at this race, unless of course you didn't read my race info at the top which makes me wonder why you are reading this at all. LOL The competitive person in all of us wants to see how well someone did at a race, right. To see if we might just be faster than them. Everyone thinks like that right? Right?!! Surely it's not only me?!?!  As I think about it today I have spent hundreds of hours running along Lakeshore and the beach strip so it's only fitting that I get my PB on a course that I know like the back of my hand!
The day started out like any other race day except my tummy was not feeling well. While I was out walking Gordie I began to think that rather than start out with the 1:50 pacer and see what happens I should start out with the 1:55 pacer and try to move up and just hope that my stomach worked itself out. I choked back my usual breakfast of oatmeal with chia seeds and got ready to go meet up with everyone. Thankfully I checked facebook one last time before I left and saw Nicole's picture that she posted of her race gear, including the bib that I was about to forget! EEK! I ran back to the kitchen and grabbed my bib and out the door I went. It was decided that I would go this race alone because Kyle had to work so we were down one car and Derek wasn't really into standing around in the cold while I waited about for my friends at the finish. It's no big secret that Derek finds my races extremely boring but seeing as I am just as uninterested in his pastimes of golf & guitar I don't take offense.
The plan was for everyone to meet up at 9am at 760 Brant and use the bathrooms at Patty's workplace in peace. We all sat around and talked and peed and ate our prerace bananas and then around 9:30 headed down to the start. We did a slow warm up run on the way down so that we could A) warm up and B) stay warm. On fresh legs on the way to the start this felt great. On cold stiff tired legs on the way back after the race this felt like sheer hell. We got to the start and said or goodbyes and good lucks and Nicole, Phil and I made our way to the 1:55 pacer. I never did see a 1:50 pacer so my plan to switch was obviously the right one. The gun sounded and off we went. Woohoo. Not even a km in I decided to ditch the pacer. What the hell right? Probably this would have been a better idea if I knew exactly what my paces were supposed to be to reach my time goal. I just aimed for a 5:15-5:20 pace and hoped for the best. Haha. Type A race personality I am not. I do not know my PB's right down to the second and I pretty much fly by the seat of my pants in races. Patty would crap her pants if I ever took the lead for us. LOL