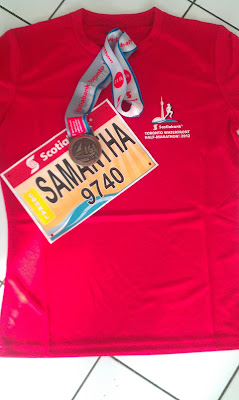 Sometimes when I'm racing I think "This is awesome. I love this". Other times I think "This sucks. What the F**k am I even doing out here?". Unfortunately STWM was the latter.

On Friday Sarah and I drove out to the "free" race expo (with $14 parking!) to pick up our kits. Thankfully we got there early and it wasn't overly busy. We got to meet John Stanton (founder of the Running Room) in all his botox glory and hear him speak.
He gave a lot of good tips so I'm happy that we sat through his segment. We also sat in on Lanni Marchant & Krista DuChene speak about womens marathon running. It was boring, I've read their same statements in various running magazine articles. Boo. Then we sat in on Reid Coolsaet, Eric Gillis, and two other past marathoners. Sorry dudes, I'm like a kid of today who loves hockey. I'm all about the Sidney Crosby's not the Lanni MacDonald's. I think we lasted about 5 mins here. It was also boring and we were hungry. Sorry Reid, you'll have to meet me another day.