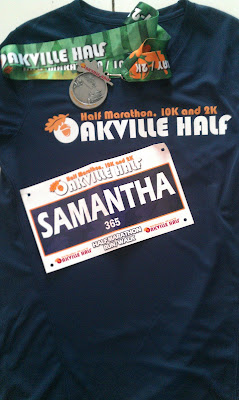 Race start time: 7:45am. Time that I woke up: 7:05am. Holy. Shit. "Derek. My race starts in 40 minutes. I slept in! Hurry up I need you to drive me" I yelled as I flew into the bathroom to wash my teeth and brush my face. Or vice versa, it was all a blur. Thank God I had laid out all of my stuff the night before! "Maybe it would be better if you drove yourself and I'll just meet you there?" "WHAT?! NO! I don't have time for that. I'll never find parking now, you have to drop me off!". I scarfed down a banana and a drink of water while I yelled out commands with my heart beating out of my chest and was out the door. Thank God again that we only live about 10 minutes from the starting line. "Oh no, I didn't go poo! This is gonna be trouble! Running makes you poo. I'm going to shit my pants in this race!" "Relax. You always get so stressed when you're late. I'm sure you're not gonna shit yourself. Geez, I've never seen you sleep in for anything. Ever.". Yeah, not helping. Probably you need to be quiet now I thought to myself as I stared out the window while visions of that guy crapping himself in a race ran through my head. Lakeshore was closed off at Third Line so I hopped out of the car and quickly made my way to Coronation Park. I saw a construction porta potty on my way but remembered seeing a lot of porta potties at the race site  when I went to pick up my race kit (along with the free bag of grass seed?!) so I skipped it. I got to the start just as the 10K was starting at 7:30am. Then I saw the porta potty line up. The line up was soooooooo lonnnnnnnng, there was no way a pit stop there was going to work. *fingers crossed*
I easily found the 1:55 pacer and then somehow my parents found me. I chatted with them for a few minutes, assuring my dad that running in a skirt with bare legs wasn't going to be the end of me and no, I didn't need his jacket. God love him. I gave them a quick hug and made my way to the start. And we're off. I had decided that I was going to use the bib holders on my belt rather than pins for the first time ever which turned out to be a bad decision as my bib fell off about 2km in. I was able to grab it and catch back up to my pacer Darryl thankfully. I didn't bother trying to secure it again, I just carried it in my hand the whole way. *eye roll* I asked Darryl if he realized that the course was long and he said that he didn't but had noticed that his garmin was about 300m ahead of the route markers. Darryl is training for a 3:45 in the Chicago marathon and was telling me about running a marathon in the Mojave Desert this past summer. It was 115*! Holy crap! Around 5k I realized that Darryl was not running a pace that was going to bring me in for a sub 1:55 so I ditched him. Sorry Darryl. Shortly after this I saw a girl running ahead of me with her bib pinned to her back. The name on the bib was Jeff. This made me laugh so I reached out and said "Hey Jeff!". Wouldn't it turn out that "Jeff" was actually a DM friend Mari. I didn't even recognize her! I guess that's what happens when your DM photo is you in cycling gear! LOL Around the 9k mark I took my only gel and then saw my parents cheering me on! Yay! My stepmom took a picture of me which was nice seeing as race photos of me will be pretty hard to find with no visible bib.
Shortly after this I picked up a runner who commented on my bib, or lack there of. His name was Bruce and also from Burlington. He's training for Niagara and was using this as a training run. I asked him what his goal time was, he said 1:45. Obvs he's doing the half. We chatted for a few km but then he started choking on his GU so I ditched him. Hope you were ok and didn't need assistance, Bruce! I had a time goal! LOL

Now I was on Rebecca and running into the wind. I didn't like this much. The wind and the loads of roadkill were the only downsides to this race. Well, other than the obvious sleeping in, having no breakfast and not getting to poo. At 16km I started to do the math and figured that while I was going to be able to PB I didn't see my sub 1:55 happening. Once again I feared that a long course was going to screw me.  I also saw my parents again which was a nice surprise. No pictures this time, but them cheering me on was really cool. Apparently for some reason my husband has never realized that he could come out on the route and see me and was really surprised to hear that I saw my parents twice! Finally we turned down Jones St and there was only 3k left. Opps! There went my water bottle flying off my belt. *eye roll* Can anything else happen to me this morning? I bet there's bird crap on my hat again! At 20k I looked at my garmin and realized that if I picked it up I may just reach my 1:55 after all so I gave it all I had left. It was also at this point while running behind a man who smelled TERRIBLE that I realized I had forgotten to put deodorant on  (and Body Glide I later realized while in the shower. Ouch.). I just hoped that I wasn't making other people as sick to their stomachs as this guy was making me. I booked it around him and came up back to Lakeshore. 21km. Yes! And then I heard the voice of angels........ok maybe not angels, but the voice of a runner who had already finished the race. "The finish is right around the corner. You have about 1 minute left to go!". I looked at my watch and it said 1:53 so I put every last ounce of energy into things and came around the corner. I held up my bib and heard the announcer say my name while the clock ticked off the seconds.....1:54:45......46......47.....48.....49. I did it! Even with the 400m long course I beat my goal time and did it without crapping my pants! Yes!