What was I doing all the way out in Barrie to run a half marathon at the end of June you ask?! Originally I had registered for this race when it was dirt cheap with the intention of running it for fun with Patty for her birthday. Unfortunately Patty had to back out, so I made plans to hook up with Robin who had told us about the race in the first place.

Thankfully there was race day pick up so I got up bright and early on Saturday morning and met Robin at the park and ride in Bradford where she then drove us into Barrie. On the way Robin informed me that the front half of the race course was pretty hilly (wtf?!?! isn't this on the lakefront where it's typically flat), the back half is mainly gravel and that the printer had shrunk the race shirts so they were going to be mailing them to us at a later time. Perfect. I was running a hilly race on a hot day without the friend who was the sole reason that I signed up and there weren't even shirts to bring home? Well all of these minuses have to turn into a plus right? Probably I'm going to go out here and have the race of my life because of all this!!! Soon enough Robin and I made it to the venue, found a sweet parking spot and got our race kits. They did offer us the shrunken shirts to have in the mean time, but the woman's large that they held up was wider than it was long. Um. No thanks, I have enough potato sacks. We then made our way over to the bathrooms where Robin bragged about the fact that they had real toilets at this race. Nice! Too bad the city didn't get the memo and they were locked. Over to the porta potty line it is! After a bit of puttering around it was time to make our way to the start. Robin placed us behind a cluster of girls in tutus, I suggested maybe we should try to start ahead of them....

.......And we were off. There was quite a bit of congestion but it didn't take Robin long to pull ahead of me. No worries, she said she was going to try for a 1:40. I was going to be happy if I could come in around 1:50. Not that I knew what pace I needed for that was. I figured I'd just run and see what happened. That's how the races of your life are run you know! They're the ones where you just run and then you look at the clock at the finish line and your entire face lights up because you freakin' rock. Just like Oakville. 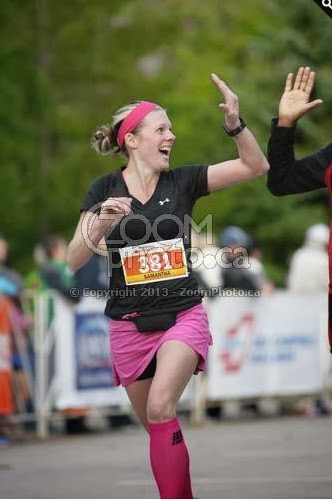 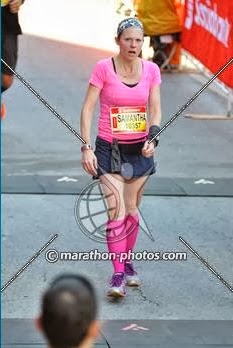 There wasn't a lot of conversation going on around me to listen in on but that was ok. I was just running and being happy, no need to eavesdrop on anyone yet. I passed a lot of people on the first out of the two way out and back and I was feeling good. It was hot but fairly shady in the residential area that we were in. Hot, shady and hilly. Urp. Uh oh? Is that my prerace banana coming back on me? Probably nothing to worry about I'm sure. I just continued running at a decent pace and kept on passing people, slowly feeling my face getting redder and redder. It didn't take long for the leader to make his way back from the turn around and then I started looking for Robin. It was quite a while before I saw any women so I started counting them just to see how she was doing in gender placing. I stopped counting after 10 but soon saw Robin looking strong after that. We smiled and waved and kept on. Soon enough I came to the turn around and started my way back. The field got a lot more congested on this portion of the run because now we were mixed in with the 10k runners. They didn't really get in the way at all though which was good, we all seemed to be running the same paces. I did take the time to let a woman know that her skirt had ridden up and she was flashing everyone. What comes around goes around and all that. Eventually we were out on the lake front where the shade gave way to full sun and the sweat really started pouring off of me. It was around this point where I started thinking that I wasn't having much fun out here. I was hot, sweaty and bored and I'd really love to get off the course with the 10k runners. They only thing was, if I did that I would have run 12.75k. Obviously that wasn't going to do so I sucked it up and took the turn to stay on the half course while the 10kers made their way to the finish line. Boo. There were a lot of spectators in this area and I took the time to high five some kids who had their hands out. I was kind enough to make sure that I only touched them with my finger tips. Obviously my hands had some serious sweat going on. It was in the park here where I really started to fade. The gel that I had taken around 9k had upset my stomach, I was head-achy and light headed at times and my get up and go had got up and went. A lady yelled out my number and told me to catch the people ahead of me. Meh. Not right now.

We were now on the gravel and I was totally dialing this race in. I truly would have walked at this point but I just wanted for this to be over and done with so I kept at it. Now people started passing me but whatever. I didn't even care at this point. I didn't even have any sort of interior dialogue other than I refused to come in over 2 hours! You know things have hit rock bottom when! A piece of hair had fallen out of my bun so I stopped and put it back in because it was annoyingly hitting the back of my neck like a wet noodle. Then a water station came up so I spent a little time there. People kept on passing me and then eventually we came up to a large hill that led up to a residential area. I couldn't even muster the energy to run this so I walked. Walking hills is ok on the trails, and Barrie is practically up North so it's kind of the same. A short time later I passed Robin again. "I'M DYING!!" I yelled to her. "Yeah, me too" she replied. Well at least I'm not the only one having a rough go of it I figured. As I came up to the final turn around I saw a lady who I had been going back and forth with for the entire race. Spotting her seemed to put a little life into my sails, and my pace started to pick back up. Frick, just get me to the finish line! I started passing people again, pretty easily as a lot of them were fading on the back stretch. I played back and forth with a man for a couple of minutes. He would stop and walk, I would pass him, he would get pissed off that I had passed him and start running again only to start walking once he got past me. If there was anyone who I was going to beat this day it was this man. Right here. Finally he muttered an expletive and that was the last I heard of him. I passed a downed runner, but there were people all around him so I kept going. He was curled on his side with his back to me, but flashbacks of Road 2 Hope played in my head. I passed a medic slowly walking down the path so I told him there was a man down. Apparently he knew. Good thing he was rushing to get the man some aid! *sarcasm* I passed a couple of vomit splatters and turned the corner to the finish line.

Finally my legs found their get up and go and brought me over the finish line. "Fuck me" I muttered to myself as I pressed stop on my Garmin. Too bad I noticed the photographer after this part. Channeling my inner Nicole I was not.

Robin was there at the finish waiting for me so I gathered my big ass medal, made my way to the water jugs(?!) and saw that they only had pizza to eat so we made our way back to the sweet parking spot. As I peeled my sweaty shoes and socks off Robin asked if I was going to come out and run this again next year. Yeah.....probably not.